In March of 2019, some friends, my wife, and I were hiking in Staten Island’s Greenbelt when we found ourselves in the midst of something quite eerie. Surrounding us were trees carved with human figures. With their symmetrical bodies and lightbulb-shaped heads, they called to mind Puritan headstones and the Blair Witch Project. On closer inspection, several of the carvings were signed and dated; they were carved by W. Dixon in the early 1930s. 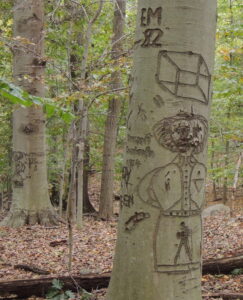 Two trees with carvings by W. Dixon. In the background to the left is the carving I’ve identified as Stripes; in the foreground, at center, is Cube. Photo: © Joseph Pentangelo.

We had stumbled upon a grove of folk art, previously undescribed anywhere, as far as I can tell, with the notable exception of a blog post from 2011.

After realizing that these dendroglyphs – tree carvings – had not been documented in any sort of rigorous way, I returned to the site several times throughout 2019, taking photos and making measurements.

Five trees contain a complex of carvings apparently by W. Dixon, including the striking human figures which had first caught our attention, as well as the artist’s signature and a distinctive sacred heart design. I identified five such complexes, and named them after distinguishing characteristics: Dots, Stripes, Cube, Tree, and Messy.

Detailed descriptions of these carvings, along with more information on dendroglyphs and a call for their broader consideration in folkloristics, can be found in my article, “A grove of folk art on Staten Island: Documenting the carvings of W. Dixon,” in the 2020 issue of Voices: The Journal of New York Folklore.

This page contains a gallery of photos of this grove, as well as a couple of small digressions – one, exploring a bit more about who W. Dixon might have been, and another, discussing the considerable damage sustained by one of these carvings, Cube, over the course of 8 years.

Gallery of the Grove

Named for the dots that cover the figure’s tunic, this tree contains four carvings that I believe to be by W. Dixon: a human figure, a date (1930), a sacred heart, and W. Dixon’s signature. Each of these elements appears on other trees in this grove.

This carving, capped with a semicircular flourish, is the most overtly headstone-like of Dixon’s dendroglyphs. Dixon’s signature is notably ornate, with lines extending from the W and N. The human figure, like those in Dixon’s other carvings, sports an inverted triangular badge on its chest. (Note that these carvings predate the holocaust, during which the Nazis famously employed similar badges.) The writing between Dixon’s signature and the figure’s head is illegible.

A sacred heart, with a wound in the upper-left, is chip-carved to the right of the human figure. The heart is capped with a Tau cross, often associated with St. Francis and, accordingly, the Franciscans. This may give a hint to Dixon’s faith.

This carving is named for the human figure’s striped tunic. There are three key elements to this dendroglyph: a date (1931), a human figure, and Dixon’s signature.

This mustachioed human figure is wearing a stripey, fringed ensemble. There is a significant amount of beech bark disease damage to the figure’s skirt or apron.

To the right of the figure are Dixon’s initials, with a long line extending from the W, and a date: 1931.

This carving contains a human figure and Dixon’s signature. I named it for the Necker cube that appears directly above the human figure.

A human figure stands beneath a gigantic Necker cube. I am not entirely sure that the cube was carved by Dixon, but I believe that it was because (a) it seems to form a compositional whole with the human figure, appearing centered over its head, and (b) the lines’ widths are similar to those in the human figure, suggesting that they were carved at about the same time. The figure’s face has been ravaged by beech bark disease. See discussion below.

Dixon’s signature appears to the right of the figure. The flourishes that characterize Dixon’s other signatures are absent here.

This unusual carving contains what appears to be a stylized tree, perhaps a pine or a willow, as well as a chip-carved sacred heart and Dixon’s initials. A mostly-illegible date appears below Dixon’s initials.

The tree’s trunk widens at its base, and what seems to be a large fruit or pinecone is attached to the upper-rightmost branch.

Dixon’s initials appear towards the bottom, at left of the tree trunk, along with a date. Unfortunately, the digits past 19 are unclear.

This sacred heart, done in Dixon’s characteristic style, is just to the left of the tree carving.

This carving of a sacred heart appears on a “graffiti tree” with carvings by many people. I cautiously suggest that it is by W. Dixon, chiefly because it is capped with a Tau cross, like Dixon’s other sacred hearts — an unusual stylistic choice. It is, however, noteworthy that this heart is carved with traditional lines rather than being chip-carved.

Who was W. Dixon?

As the carvings are in close proximity to a building that was once part of the Seaview complex, used to house and treat people with tuberculosis in the mid-20th century, it is almost certain that Dixon was a hospital employee or patient.

In correspondence with people who once worked at Seaview, I learned that a number of employees as well as patients had the surname Dixon, but that most patients were too physically afflicted to have made these large, elaborate carvings in the woods. It thus seems likely that W. Dixon was an employee at Seaview.

It is perhaps worth mentioning that a Dixon family has been established on Staten Island since at least the late 19th century. A historic map in the New York Public Library’s collections shows that in 1874, a W. Dixon (certainly not the artist, due to the chronology) owned 17 acres of land on Bloomingdale Road, and E. Dixon owned 3 acres nearby, to the west. In 1890, it was written that “lands of R. H. or Robert Dixon” were to the east of Sandy Ground in Harrisville. Several members of the Dixon family were associated with St. John’s Methodist Episcopal Church in Rossville. Whether W. Dixon was a member of this family is unclear, and my archival research to find out just who W. Dixon was is ongoing.

The only other documentation of Dixon’s dendroglyphs that I am aware of is Erik Burke’s blog post. Comparing Burke’s photo of Cube from 2011 to one that I took in 2019, it is clear that a considerable amount of deterioration has occurred to the human figure’s face in only eight years. This is the result of beech bark disease (BBD), a serious but common result of tree carving. 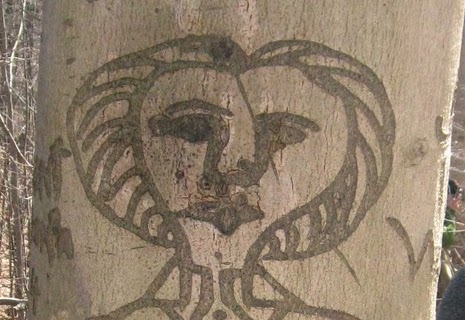 The face of Cube was clearly legible in 2011. Cropped from an image by Erik T. Burke. 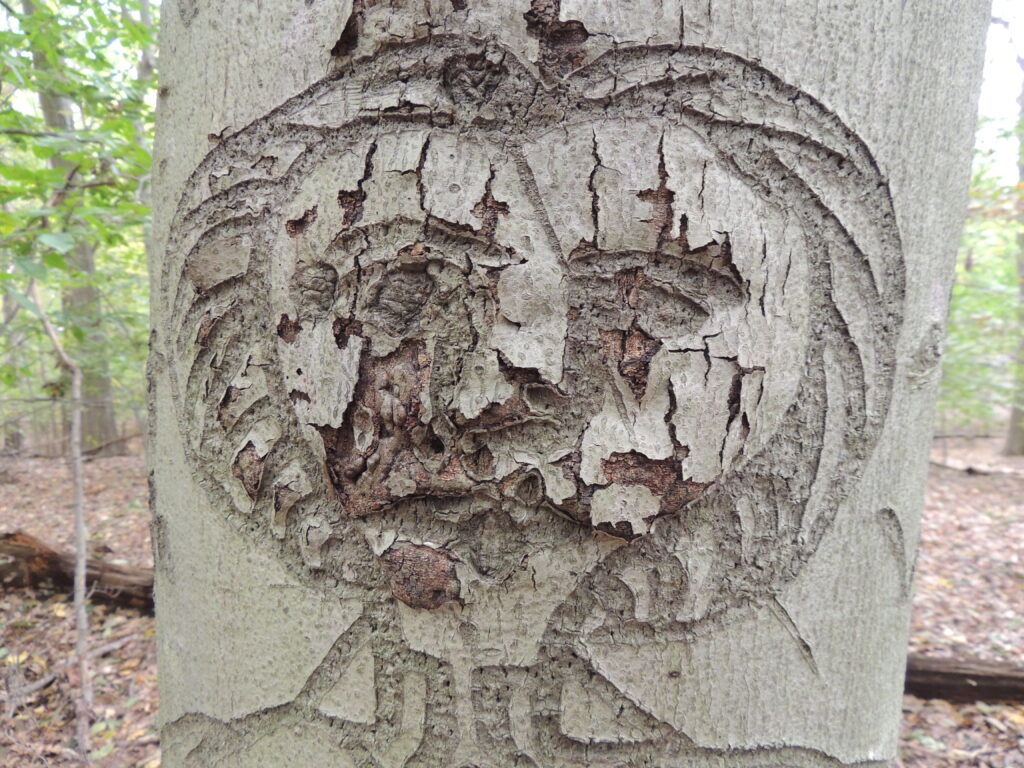 But by October of 2019, Cube’s face had sustained considerable damage from BBD. © Joseph Pentangelo.

BBD is described by the US Forest Service as “a complex affecting American beech (Fagus grandifolia), [which] includes both insect and fungal components.” When a beech tree is carved, its bark is left vulnerable to scale, an insect which feeds on the tree’s sap. This feeding in turn invites further damage from a fungus, Neonectria. According to the US Forest Service, “the resulting beech snap and mortality levels may reach 50 percent in 5 years.”

Damage from BBD is also obvious in the skirt or apron of the human figure Stripes, although it does not affect the carving’s legibility. Still, since the disease is present in this stand of beech trees, it seems only a matter of time before more damage is done. This highlights all the more how important it is that these carvings be documented, and the importance that robust documentation efforts be carried out for other dendroglyphs.

All photos on this page are © Joseph Pentangelo, unless described otherwise in the photo’s caption.

This entry is licensed under a Creative Commons Attribution-NonCommercial-NoDerivatives 4.0 International license.

Need help with the Commons? Visit our
help page
Send us a message
Skip to toolbar

Built with WordPress | Protected by Akismet | Powered by CUNY